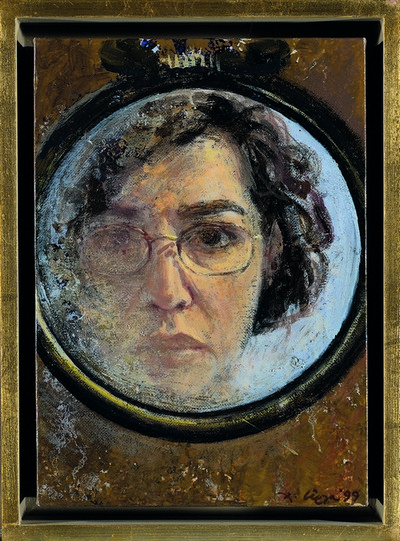 From 1980 to 1983, she continued studying Interior Designing at the Fine Arts School of California State University of Long Beach, USA.

From 1990 to 1992, on the Greek State Scholarship, she continued her studies in Painting at the Ecole Nationale Superieure des Beaux-Arts de Paris, France, under Pierre Carron.

Her works  can be found in the Greek Parliament,  the Hellenic National Gallery,  the ‘’Megaro Maximou’’ (the Prime Minister building) ,  the Benaki Museum,  the  Florina Museum  of Modern Art,  the Kouvoutsakis Pinacotheque,  the Moschandreou Pinacotheque, the Fryssiras Museum,   the Agricultural Bank of Greece Collection,  the AGET  Heraklis Group of Companies Collection,  the Interamerican Collection, and other private museums and collections in Greece and abroad.

Her work was selected to represent  Greek Contempoary Art during the Olympic Games of 2004.

On  September 2008, as a part of the Enviromental  Programme of  the Goulandris Museum of Natural  History and the SKAI Radio, she donated one of her works, which was auctioned and  bought by the Greek Parliament. The proceeds were donated to the National Forest Fund.

She is considered  to be one of the most  important  Greek Contemporary artists .

Inspired by Nature, her work is  flirting with  abstract and representative elements,   at the same time.

…Chryssa creates images , which sometimes refer to the traditional landscape and other times are more reminiscent of the lunar landscape of Tapies, while, other times they show a connection with the gestural work of Pollock…

(M.Lambraki-Plaka, Professor of the History of Art, Director of the Hellenic National Gallery)

She has done numerous solo and collective exhibitions in Greece and abroad.